Discover the history of Clearview Township by visiting these many heritage sites both natural and man made.

Built in 1892 at a cost of $425.20, Creemore’s jail is the smallest 3-cell structure in Ontario and possibly all of North America. Under the direction of the village Constable, this little “lock-up” served for half a century as a secure place to jail lawbreakers. For offences like drunkenness or disturbing the peace, inmates were lodged here over night. Those charged with more serious crimes were held here until transported to the County Sheriff in Barrie.

The jail is open to the public in the summer and is located next to a restored log cabin with history host on hand each Saturday during the summer season.

In the 1940s, new provincial police regulations closed this local lock-up. In the 1960s it re-opened as a tourist attraction, promoted as “North America’s Smallest Jail.” Although other communities may contest the claim, Creemore continues to affirm its title as a village with “a big heart and the smallest jail.”

From May through October, the little lock-up is open daily to the public.

First built at the edge of the village (at George and Mary streets) and constructed with trees harvested locally, this is the last original log house in Creemore.

Its first residents were James & Abigail Scarrow and their ten children. Early in the 20th century, Joseph & Emily Veitch made it their family home, followed by their daughter, Hazel (Veitch) Shaw. Its last resident, Marlyn Shaw, lived in it alone for many years.

Over time, the cabin’s exterior was radically altered and its interior changed, but the basic structure remained. Early in this century, community volunteers raised funds to save the building and to reconstruct it centrally in the village on vacant former railway land. Owned by Clearview Township, the cabin is financially supported and administered by volunteers. It serves as a venue for cultural exhibits and programs. “History Hosts” welcome visitors on Saturday mornings from Victoria Day to Thanksgiving, 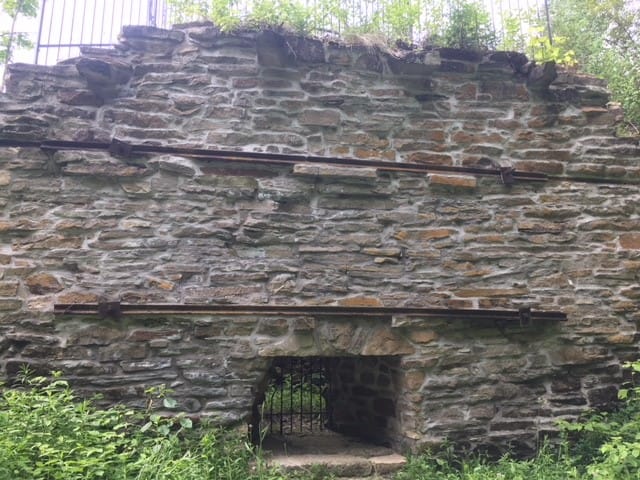 This side trail is part of the Bruce Trail Conservancy and leads to a restored lime kiln that was built circa 1860. Designated pathways and fencing are in place for hikers to view the structure. Franks Lime Kiln Side Trail is 30 metres (approximately 100 feet) in length and is an easy to moderate walk.

Parking: Located on the North side of Coutny Road 91 at the Duntroon Nature Reserve. Follow the blue Bruce Trail signs.

This cemetery was established in 1855. It was considered one of the only integrated cemeteries of its time, with black, white and aboriginal peoples all buried in it. It remained an active cemetery until 1940 and ended up falling into a state of disrepair by the 1960’s. Prison inmates were used to clear away the surrounding debris of the site however; it fell into disrepair again by the 70’s. It continued to remain in a woeful state until 1997 when Jane Cooper-Wilson and a group of volunteers secured permission from the Township of Clearview to restore and maintain the site. Her organization, The Silver Shoe Historical Society has worked hard to restore and maintain the cemetery. They have also discovered around 400 documented burials with even more awaiting investigation.

Clearview Township and Purple Hills Arts & Heritage Society, along with Creemore Springs has placed historical plaques in the village of Creemore as part of the self-guided Historical Walking Tour.

One of these plaques include the historically accurate story of Samuel de Champlain's great expeditition from 1615-1616 called "Champlain Slept Here". This plaque is included on Ontario Champlain Scenic Route. For more information about Route Champlain visit the English or French websites.